At the core of this argument is the premise that all such evaluations are subjective, and based on parameters that will vary from person to person. In whiskey, some people like them really old, but others will dislike the intense wood character of something that's been in a barrel for 25 years. The two will thus never agree on the "best" Single Malt Scotch.

So rather than present a list of what I consider to be the "best" beers, it's better to describe them as my favorites, and to mention some of the subjective factors that influence my choices. Some of these factors, in fact, have nothing to do with the gustatory qualities of the beer itself.

One is what I call the bother factor. For example, two of the most impressive beers I've ever had are Orval Trappist Ale and Trappistes Rochefort 10, both from Belgium. Both are unfiltered and have a lot of sediment (they're not just cloudy; they have crud in them). After bringing them home, you have to let them sit undisturbed for a day or two, then carefully decant them into a glass, taking care to cease pouring as soon as you see solid stuff reaching the top of the bottle. Sometimes (okay, most of the time) this is just too much bother.

Another factor is availability. Any beer I have to drive to Wisconsin to get is never going to be a favorite, nor is one which is only seasonably available. For example, I like Deschutes "Red Chair NWPA" more than Sierra Nevada Pale Ale, but the former is only available from January through April. If it's September and I'm in the mood for a Pale Ale, only the ones I can actually get are contenders for "favorite".

Lastly there's an affordability factor. A favorite beer is one which I can afford to buy a sixpack and share with friends. The aforementined Trappistes Rochefort is $7.50 for an 11.2 oz bottle, which works out to $45 for a six pack. For that amount of money I can buy a four sixpack assortment of the following:

Victory Prima Pils
Type: Pilsener style lager
Traditional ales are made using top-acting warm fermenting yeasts, but in the early 1800s German brewers started using bottom-acting cool fermenting yeasts to produce lager beers, which are lighter bodied and crisper than traditional ales. In the city of Pilsen (located today in the Czech Republic) a style of lager was produced which used Saaz Noble hops, and beers made in that style are known as Pilseners (also spelled Pilsner). For years my favorite was Pilsner Urquell (which is, in fact, made in Pilsen), but after trying the Victory product all I can say is "buy American!" Prima Pils is a beautiful yellow-gold, with aromas of grass, citrus and floral hops, with sweet malt joining these on the palate. Right now the only place in town that sells it is Corvallis Brewing Supply; price is $11.10 per sixpack.

UPDATE (July 9, 2012): Sadly, this is no longer carried by the distributor here in the Pac NW. I wish I'd known that when I was California last month, I would have brought back a case.

Sierra Nevada Pale Ale
Type: Pale Ale
It's been called "a classic among American beers" and is certainly the standard setter for pale ales, which is pretty impressive for something produced in this volume and having near universal availability. Golden orange color, with aromas of grain, yeast, hops and citrus, crisp and tangy on the palate with a clean, dry finish, this is a reliable "go to" pale ale. It's available year round and frequently priced below $7 per six pack at your friendly neighborhood grocery store. Kathy likes to mix it with Deschutes "Obsidian" Stout for a "black and tan".

Stone IPA
Type: India Pale Ale
My favorite style of beer, IPAs were invented by the English but brought to perfection by American craft brewers. These are hoppier than Pale Ales, and there are a lot of good ones available, many of which have fans who wouldn't hesitate for a moment to tell me that the Stone Brewing product is not as good as their favorite (Ninkasi "Total Domination" being one and Dogfish Head "60 Minute" being another). Nonetheless, for me this one has a slight edge. An intensely hoppy nose, with hints of grapefruit, is followed by a perfect balance of bitter hops and sweet malts on the palate. The 22oz bottles are widely available, and you can can get 12oz sixpacks ($11) at University Market at 1149 Van Buren and at Market of Choice. NOTE:  Stone's "Ruination" double IPA offers nearly identical aromas and flavors and is only slightly stronger (7.7% ABV versus 6.9%) and is not worth the extra expense, in my opinion.

Bear Republic Hop Rod Rye
Type: Specialty Ale
Although beeradvocate.com classifies this as an IPA and ratebeer.com as an Imperial/Double IPA, I think the brewery's own designation ("Specialty Ale") is more accurate. To me, it's not hoppy enough to be an IPA (although it is hoppy), and the addition of rye to the mostly malted barley mash adds a flavor element that an IPA lacks. Deep red in color, with complex aromas and flavors of hops, citrus, rye and malt, it makes me think of toasted rye bread with a thin spread of grapefruit marmalade. It's my favorite American beer, and worth the $5+ asked for a 22oz bottle. Available at University Market, Market of Choice and Corvallis Brewing Supply.

Ayinger Celebrator
Type: Doppelbock
Bock beers are lagers, and are traditionally made in the winter or early spring. The Ayinger is an exception, being made and imported year around. For reasons lost in the mists of antiquity bock beers usually have a picture of a goat on the label, so doppel (double) bocks often have two (my sentimental favorite, Leinenkugels "Big Butt", depicts two mountain goats charging one another). The Ayinger is one of the best of its type. Dark brown in color, with scents of malt and molasses pushing aside those of the hops, it's a smooth, rich, almost creamy beer. Sold in fourpacks for about $10, you can find it at Corvallis Brewing Supply, Market of Choice and University Market.

Deschutes Obsidian
Type: Stout
Guinness popularized stouts, which are dark ales made with heavily roasted malt, but try this one and you'll never go back to the Irish product (the sold-in-USA version of which is actually brewed in Canada). The Deschutes product is a classic example of its type, with distinctive chocolate and coffee aromas and flavors and a super-smooth presence on the palate. It's a little hoppier than its stablemate, the likewise excellent Black Butte porter, and for that reason I prefer the stout. Available almost everwhere, and frequently on sale for less than $6 per sixpack. 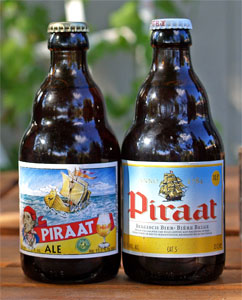 Piraat Ale
Type: Belgian Double IPA
The Belgians make IPA mostly for export (the locals find them too hoppy), and they make them strong (the Piraat is 10.5% ABV). I discovered this one quite by accident some years ago when I was buying beer for our annual Pirate Theme Halloween Party. Upon trying it I thought hey, this is really good. It's got that fruity thing going that many dark Belgians have, but without the pesky sediment. Being an IPA, it's got a lot of hops, but the bitterness is balanced out by the sweet malt and the fruit element. A rich, smooth character make it dangerously approachable (don't forget about the 10.5% alcohol content!). The funky old label (with the pirate) is being replaced by a less entertaining one, but fortunately the contents are unchanged. Look for it at Corvallis Brewing Supply. It's not cheap, costing $5 for a 11.2oz bottle and $10 for a 22oz, but it's just the thing for getting into a pirate state of mind. ARRR!!!!

Leinenkugel's Classic Amber
Type: Amber Lager
No, not a great beer. In fact, according to most of the hop-heads on beeradvocate.com and ratebeer.com, not even a "very good" beer. Mild hop and caramel aromas and flavors make it a decent quaff, and for me, that's good enough. Leinie's is the brand that is interwoven into memories of time spent at my grandparent's cottage on Popple Lake, ten miles north of Chippewa Falls, the town where the brewery is located. We'd fish in the morning, clean 'em, have lunch, spend the afternoon playing horseshoes or just sitting, looking out at the lake. The blue water and sky, the scent of spruce and fir trees, a cold bottle of Leinie's in my hand. It will always have a place in my heart, and thus a place in my refrigerator as well. You can find it at Albertson's on Kings, for about $8 per sixpack.

UPDATE (July 9 2012): The Corvallis Albertson's no longer consistently carries the Classic Amber, but usually has some variety of Leine's, typically a seasonal offering. At present it's the Summer Shandy.

As my grandpa would say, Skol!
Posted by Scott

Email ThisBlogThis!Share to TwitterShare to FacebookShare to Pinterest
Labels: Beer